The Viking Legal Team in Action 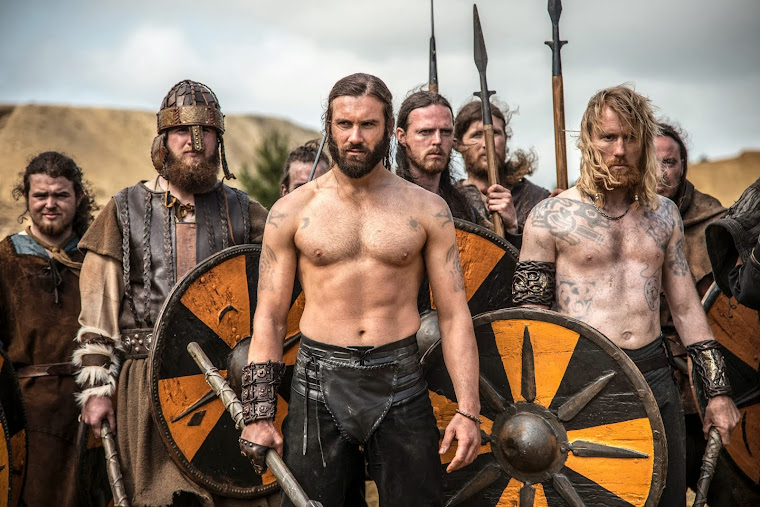 Snorri is unhappy about your bar tab - VERY unhappy... 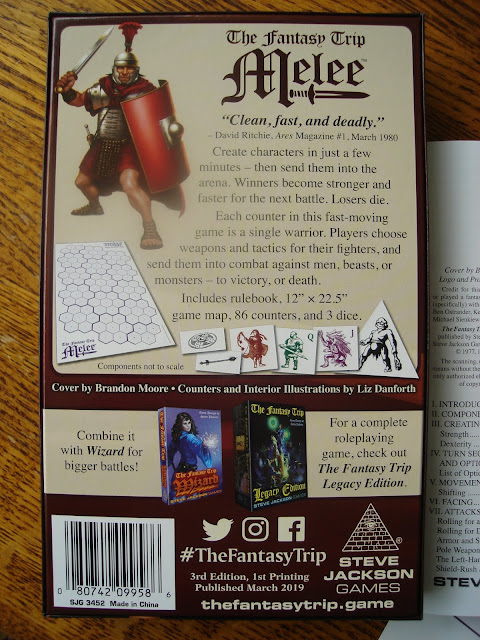 It was "clean, fast and deadly in 1980, and it still is today!
Turn 1 setup. I put the slowest guys in the forward hex, faster ones flanking them. Note at the bottom the little markers I've made with the extra cardboard bits from the counter sheets. 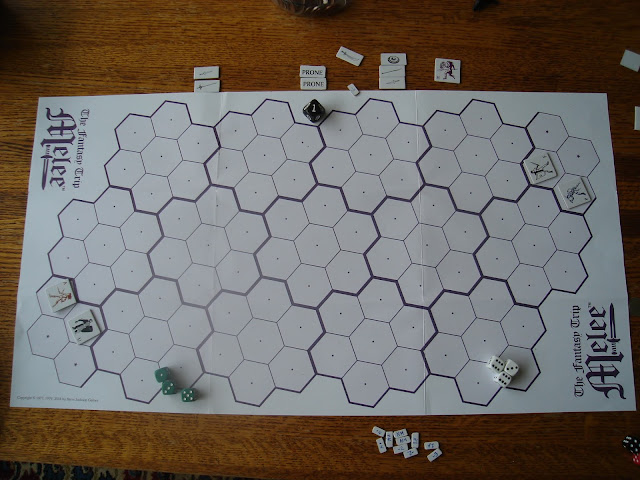 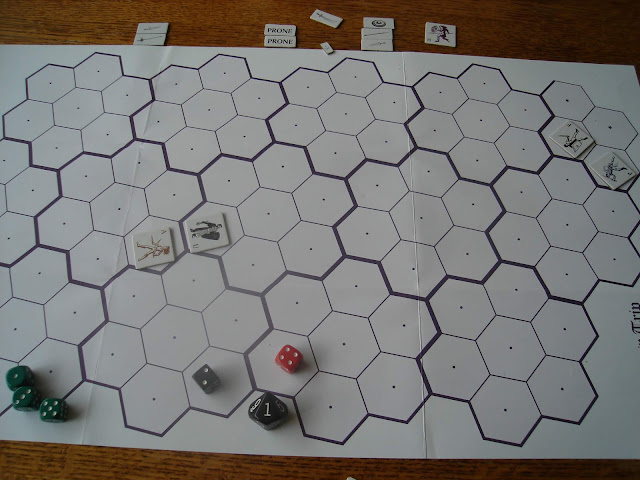 Turn 1. TR moves to keep backs against the wall v. the fast-moving A fighter. 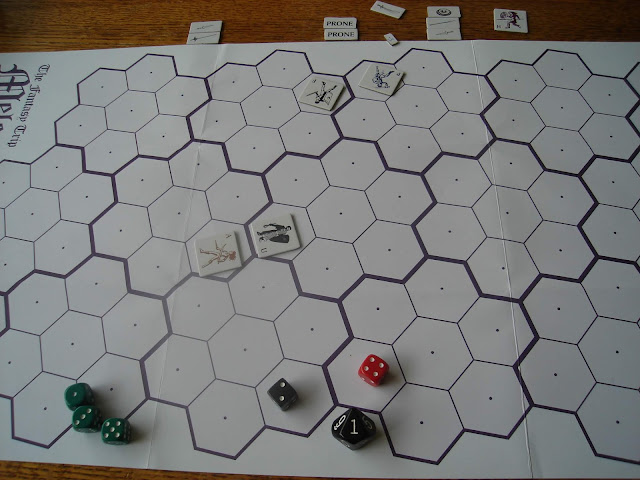 Turn 2, TR wins IN again, but chooses to move first and Engage BOTH fighters against the fast, lightly armored A fighter. Their heavier fighter Engages U. Tactical Note: Both sides have one fighter doubled up upon, and one facing one fighter. The fighter Engaging two can pick which one he wants to fight. The nature of hex warfare means that it is impossible to be "exactly" lined up like on a square grid [chess board] and eliminates the need for a corner to corner combat rule. 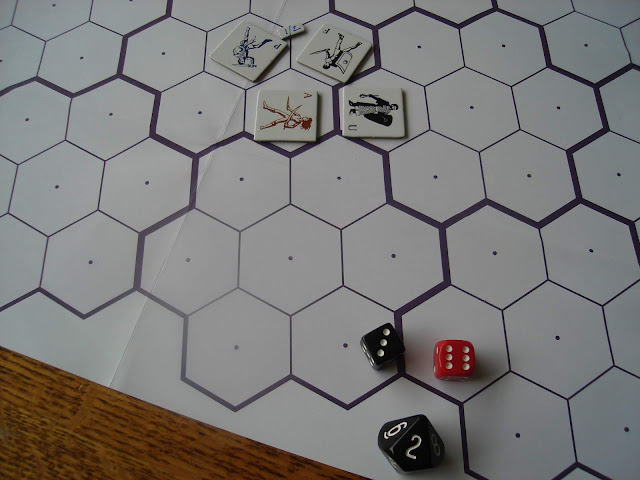 Turn 2. The problem with moving first...you have to be careful how you face your fighters! I should have faced F towards U. He can Shift one hex and still fight F, and is on his Side for +2 DX [+3 to hit]. 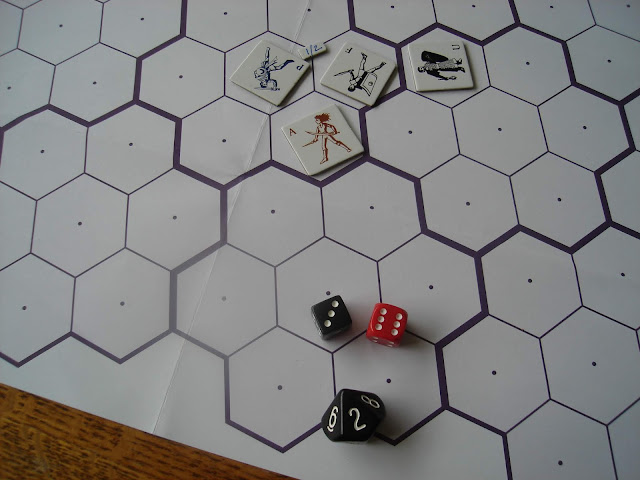 Turn 2. I correct the Facing of F. 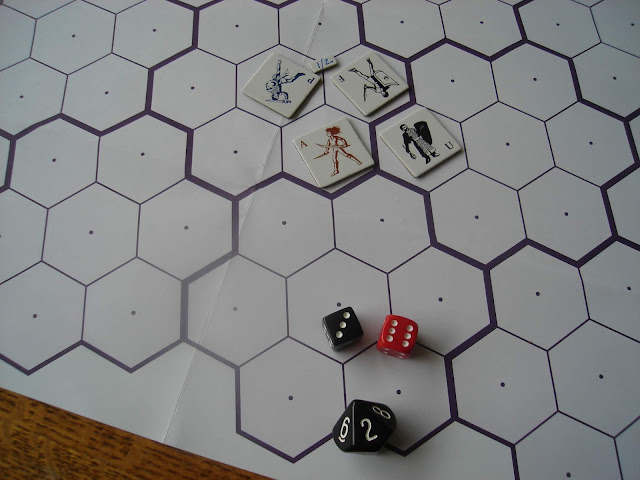 Turn 2 Combat. A has the highest adjDX and rolls first needing 14 or less, hits, and rolls a 5 for damage, getting 3 thru the cloth armor and small shield of P.  He then needs a 10 or less to hit with his Main Gauche, but it is -4 due to the left handed 2nd weapon. That is a 50% chance to hit and he does but doesn't get enough damage with the 1d6-1 dagger to hurt P, unfortunately.

This is followed up by P hitting easily with a '10' [needing 12 or less] and rolling well for his broadsword's damage - the '9' inflicts 7 damage, after A's cloth armor and Main Gauche each stop 1. Fighter A is -2 for taking 5 dmg, and -3 for having 3 or less total Strength left - UGH!

Tactical Note - This could have gone the other way, with A attacking first, hitting, and inflicting 5 damage against P with his 2 weapons, but even just a couple of points of Armor protection makes a big difference against a 1d6 weapon of any kind, much less a 1d6-1. 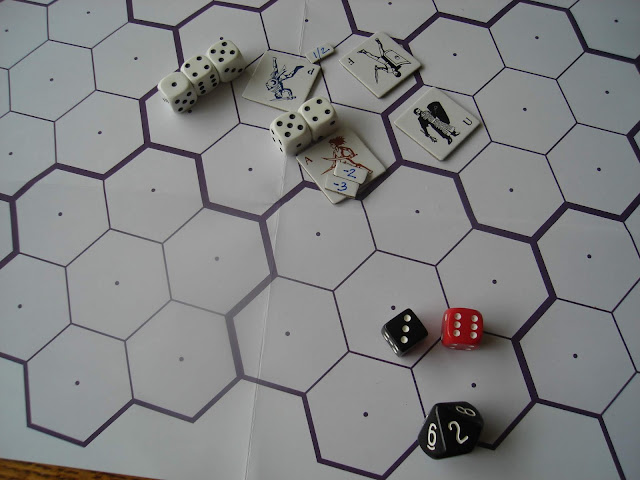 Turn 2. F then follows up needing an 11, and hits but blows the damage roll, inflicting 1 damage when he could easily have killed him with a 5+ on 2d6. Well, A got fortunate... 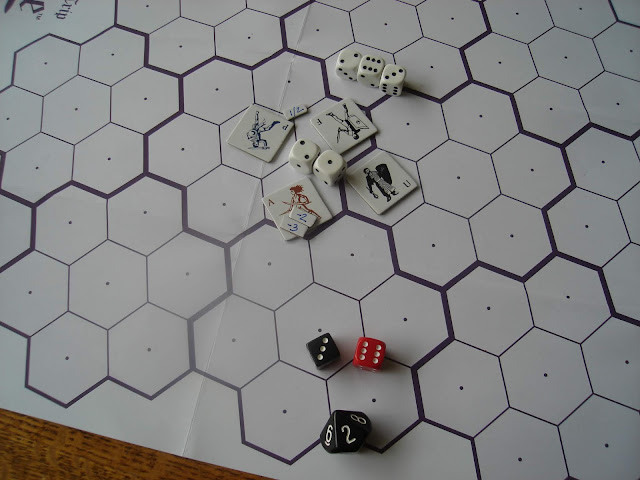 Turn 2. U finally gets a chance to swing, but totally misses, needing a 10 or less and rolling a 12. 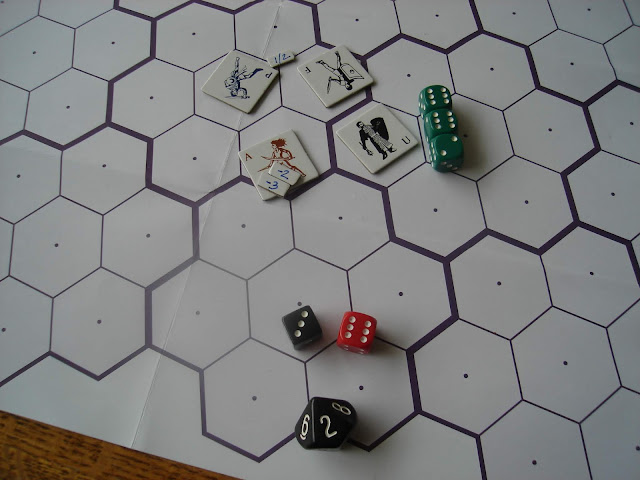 End of Turn 2. Elf has two hits left. P has 7 left. U and F are unhurt. Forgot to erase damage from the last game. Bottom line is that Team Left has one fighter almost dead. 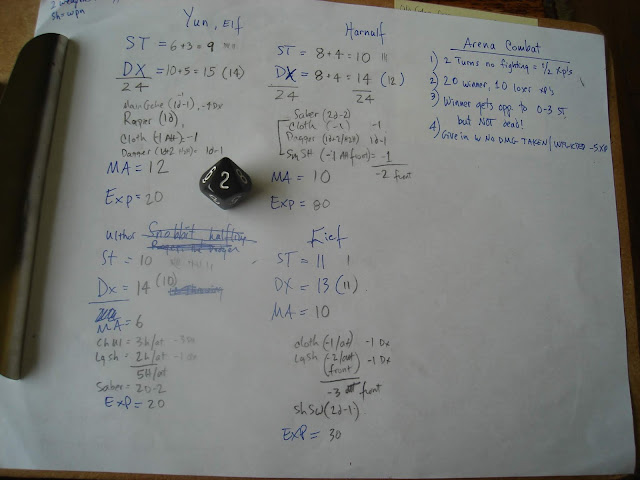 Tactical consideration - Disengage. With his DX14, A can Disengage during his Combat round, which is first as he has the highest DX. This allows him to move one hex away from P, who would have no one to fight that round. 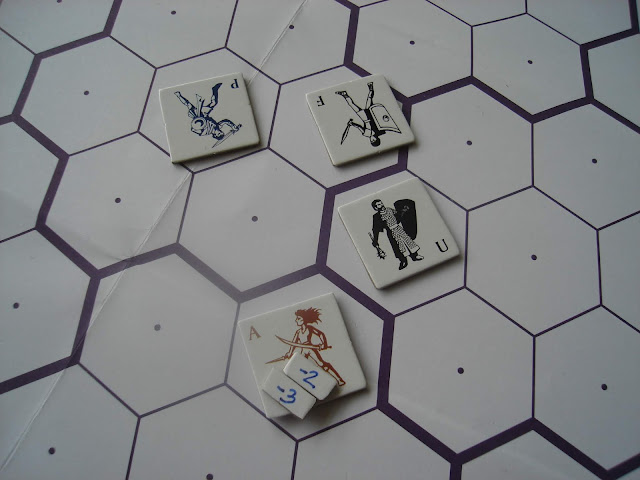 IF his side won the IN, P would be able to move up and Engage A again. If A again chose to Disengage, P could fight U with F, which is probably the only way they can take him out with his heavily armored front [-5 to damage between the large shield and mail armor]. 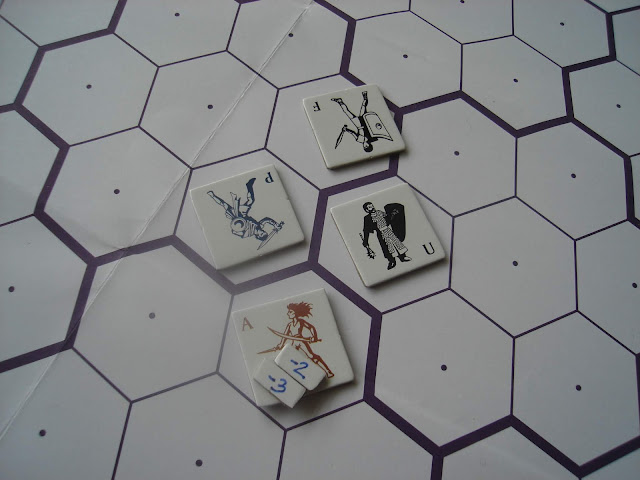 Turn 3. Team L wins IN, and force TR to go first. P Shifts one hex, F can't move anywhere except straight ahead one hex, as you cannot Shift out of Engagemend from an opponent.  F stays put. 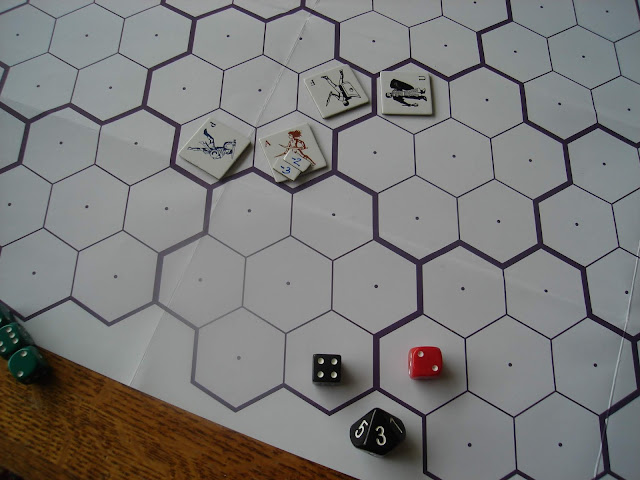 Turn 3. A should have Disengaged. I chose to have him Defend, which forces P to roll an additional dice to hit for a 12 or less...and he does, then rolls 10 damage. A  is toast. Tactical note: Had A Disengaged, P would have had no one to fight, and then A could have used his superior mobility to get away and try to re enter the fight later, perhaps against someone's rear or side. Lesson Learned! 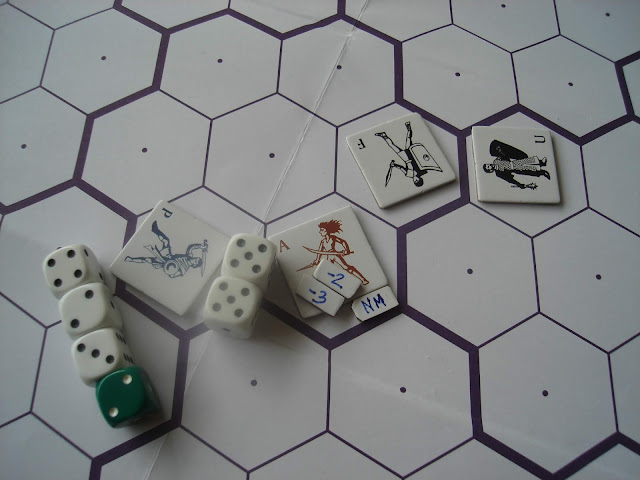 F fails to damage U, and U inflicts a little against F. End of Turn 3 has both TR fighters down 3 points, and U down zero. With their superior numbers, they may be able to take out U. 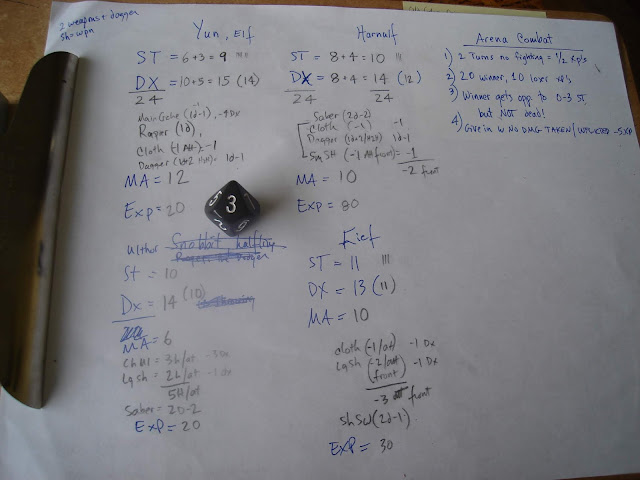 Turn 4. TR wins IN, which they need to do if they are going to flank U. U can't Turn as F. could then get on his Side. P manages to use his MA10 to move 5 and get on U's Side, anyway. He gets +2 to his 12 DX and rolls a 13 - only hitting due to the Side Bonus. He then rolls '11' for dmg, which will get 8 through as U's shield only stops damage from a Front hex attack. He'll be getting knocked down. 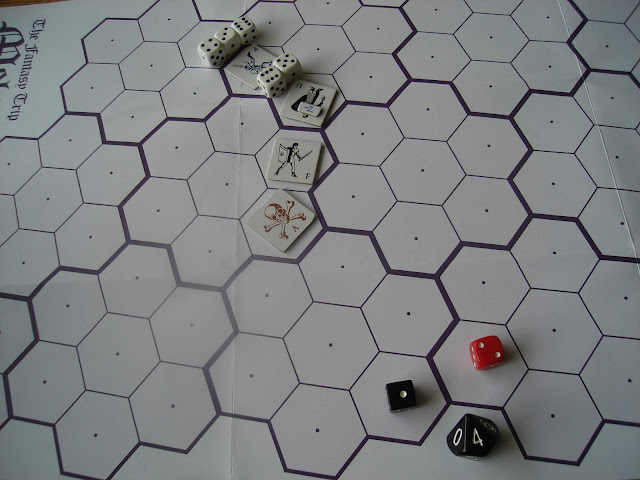 With a significant hit advantage of +4 against a Prone figure, F easily hits, and quickly finishes off U despite his armor - the Broadswords 2d6 is a great weapon, averaging 7 damage, but you can roll hot and get 12!  Or roll a '2' and get nothing. But the bell curve is in your favor.

For this game, no Missile weapons, and no Hand-to-Hand rules were used. I just wanted to concentrate on learning the hand weapon combat tactics and rules.

This is a very tactical wargame of man-to-man combat, and should be satisfying to any wargamer, even if you haven't a bit interest in Skirmish or medieval / archaic periods. Remember, these rules are FREE, with plenty of links in my previous post which is here [CLICK].

Thanks for your comment! t will be posted after it's moderated.